Boğaziçi Eski Mosque is a mosque in the Baklan town of Denizli Province. The building consists of three naves and was constructed in 1772. It’s walls are made from stone up to the foundation with mudbrick covering them farther up.

The mosque, which has an aesthetically rich interior decoration and wall paintings consisting of architectural depictions reflecting the art of painting developed in Anatolia at the end of the eighteenth century. 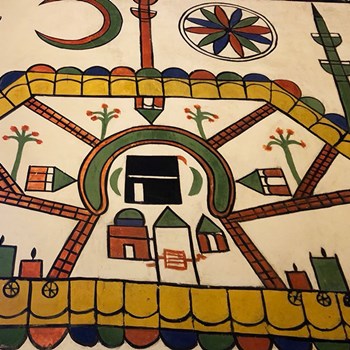 The ceilings and wooden poles inside the planned rectangular mosque are decorated with spectacular drawings. The exquisitely designed walls amaze, using Turkish wood, decoration, and carving art together.

The mosque's wooden pulpit is unadorned, and the ceiling and supports feature rich hand-carved decorations.

The interior and exterior walls are supported by square wooden pillars. The mihrab is semicircular in shape, with a muqarnas canopy on top of it. The mosque's wooden pulpit is unadorned, and the ceiling and supports feature rich hand-carved decorations.