In 1962, the Turkish Government turned the castle into a museum for underwater discoveries of ancient shipwrescks in the Aegean Sea. This has become what is now called Bodrum Museum of Underwater Archaeology, with an exhibition hall showcasing various commodities such as amphoras, glass bottles made during the Roman and Byzantine Era to, bronze sculptures, clay pottery including items from second millennium BC through early Christian period, and iron tools. The majority of its collection dates back to archaeological efforts carried out by The Institute of Nautical Archeolgoy in 1960 when they discovered several shipwreck collections. The shipwrecks are as follow: 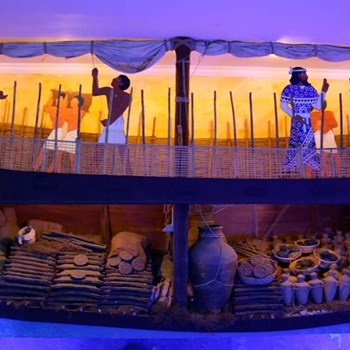 The former chapel now houses an exhibition of vases and amphoras from the Mycenaean age (14th to 12th centuries BC) and findings from the Bronze Age (around 2500 BC). The commercial amphoras illustrate how these containers were used by ancient people.

The Italian Tower features a collection of ancient coinage and jewelry in the Coin and Jewelry Hall, as well as an exhibit room devoted to a princess's tomb that is between 360-325 BC. In the Ancient Glasses Collection, you'll find one of the world's largest collections.

Two 2,000-year-old shipwrecks have been constructed from scratch: the Fatımi ship sunk in 1077 AD and the large ( Uluburun Shipwreck )from the 14th century BC.

A garden inside the castle is a collection of many different species native to the Mediterranean region. Turquoise and amber peacocks parade under flowering trees and bushes. You can see from the towers the whole city as well as some neighboring bays.