Bodrum AmphitheatrePlaces to Visit in Mugla

Built in the 4th century BC, The Theatre at Halicarnassus or Bodrum Amphitheatre is a Greco-Roman theatre that can be found in current day Bodrum town.

The Bodrum Amphitheatre is one of the most well-preserved structures from ancient Halikarnassus and can be accredited to King Mausolos as its builder. Originally, it was constructed during the 4th century BC and enlarged in 2nd century AD by Romans. 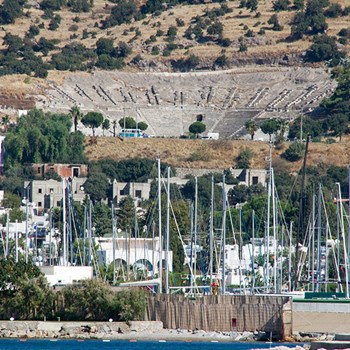 First built in the 3rd century BC, the theater at Polis is an excellent example of a classical Greek theatre. It has three main sections: the stage (or skene), half-oval orchestra seating, and audience seats (the cavea). With a cavea width of 86 meters and an 18 meters orchestra diameter, the theatre originally had a seating capacity of 10.000 to 13.000 people. Some seats are inscribed with names - which might have been those who helped to pay for its construction - that make it similar to theaters we have today. This open-air museum became a major tourist attraction after excavation began here in 1973.

The Bodrum Amphitheatre, which is part of the September Festival, can be found on the road to Gumbet and is used for musical concerts during the high season. It's in good condition and worth a visit.