The ancient city of Blaundus was in the Roman province of Lydia. Its ruins are at Sülümenli village near Ulubey town in Uşak Province.

Blaundus was built on a narrow, cliffside strip of land that juts out into the canyons of Ulubey. Turkey’s largest canyon network is carved by the Banaz and Ulubey rivers. Blaundus sits at the very eastern edge of historic Phrygia (in present-day central Turkey) and its western edge at Lydia. 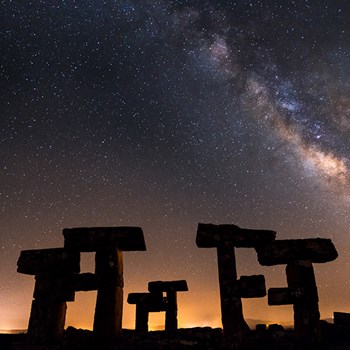 When Alexander The Great arrived in Asia Minor, he conquered Persian territory and therefore, brought a more unified Greek culture to those territories. He also established new cities that remained filled with immigrants from Greece. Blaundus is one of these examples.Although Blaundus never became particularly important, it was founded in the wake of Alexander and populated with immigrants from Macedonia; the homeland of Alexander himself.

In Roman and Byzantine eras, Blaundus was an ancient city that served as an ecclesiastical seat. The bishopric is know by three names – Blaundus, Blandus, and Balandus. It was connected to a metropolitan archdiocese at Sardes by the fifth century AD, and thus made part of Constantinople’s Patriarchate.

The remains of the ancient city is scant, and you should only visit if you are a fan or historian. Few temples, colonnades, theaters remain from centuries before. The theater is now little more than overgrown depressions in the earth and the stadium has been reduced to flat ground with few signs of where seating would have once ringed around its circumference. One wall guarding access to the forgotten city still stands though it is rather unimpressive as well as unattractive compared to other glorious fortifications that you can see in your travels so far. Entrance gate of the city, horses, and arches symbolizing the city are among the historical buildings in the region.

Looking out at the cave openings below and across from the city you can see numerous cave-tombs carved into the rocks. The pictures taken by the stones in front of a starry night sky (despite the "no entry after 7PM" sign) are striking and popular. They are not nearly as big or impressive as some make them out to be, but they point to an interesting mystery about why these stones were built and how they seem defying gravity.