A migratory bird, the northern bald ibis (hermit ibis) or kelaynak in Turkey is found in barren, semi desert or rocky habitats and lives only in Birecik in Turkey, which is about 80 km far from Sanliurfa city center.

The northern bald ibis is on a watch list for endangered species and scientists have conducted research, as well as projects to help prevent their extinction. The colony of the birds lives in Birecik district of Sanliurfa province, with a population found only on the Euphrates River in southeastern Turkey. 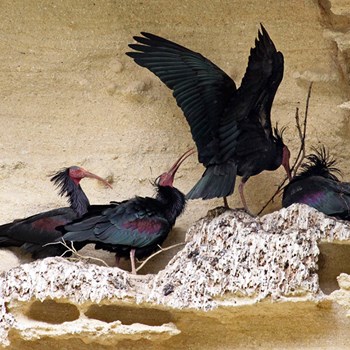 The northern bald ibis lives in colonies nesting and mating on the steep rock cliffs to protect themselves and their eggs from wild animals, humans, or other natural predators. They lay between 2-4 eggs a year, and also feed mainly on insects, beetles, lizards, snails, worms ants scorpions by poking around with their long beak into cracks in the ground. Male birds mature when they turn 5 years old. Northern bald ibises have an average life span of 25-30 years.

Birecik's surroundings are home to the critically endangered northern bald ibis. These monogamous birds migrate back around Valentine's Day and nest around the middle of May. They leave Birecik in July after breeding their young.

In 1977, a breeding station was established to aid the critically endangered Bald Ibis. One element of this center's work is feeding these birds a special diet consisting of meat, eggs, grated carrots, chicken feed and unsalted cheese. Another is monitoring them for reproductive behavior which begins in February or March. Biologists releases some bald ibises into nature every year so they can reproduce naturally and follow their natural migratory pattern before eventually returning to the breeding program center, Birecik.