BinbirkilisePlaces to Visit in Karaman

Binbirkilise, literally meaning one thousand and one Churches, is a region in the ancient Lycaonia which is now Karaman province and it has around 50 Byzantine period church ruins.

The region is located on the northern slopes of the volcano Karadağ, around 30 miles (48 kilometers) north of Karaman. The church ruins are situated in and around settlements Madenşehri, Üçkuyu and Değle. 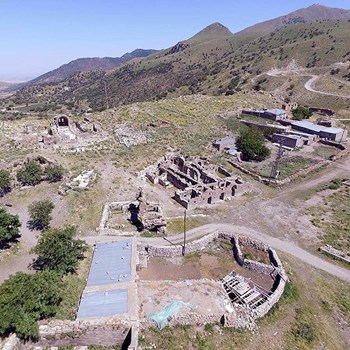 The region's many Christians in the 3rd to 8th century left behind ruins of churches, monasteries, cisterns and fortifications which are found throughout villages. The stone materials were reused for other buildings causing continuous deterioration of what remained.

From the architectural point of view, we can note that the domed basilicas of Syriac Orthodox type are interesting. The walls were built with large cut stone blocks because there is no wood in the region and they are topped only with stone-headed roofs instead of flat wooden roofs. In apses, there are matronea behind columns on an upper row and double clerestory windows.

The narthexes of these churches are almost always double arcades and have one central column. Paintings can sometimes be found in them, as well as rare remnants from the Hittites, Romans and Hellenistic periods; infrequent traces are evidence of other civilizations that once occupied this region.