Bayburt CastlePlaces to Visit in Bayburt

The Bayburt Castle, which can be reached by crossing the Zigana and Kop Mountains, is also on the trade route connecting the Black Sea to the Persian Gulf. There is a lot of information about the name, importance, magnificence and daily life of this castle where travelers often visit. It is not known exactly who built it--it was built on steep rocks in north side of city.

Despite the original claim that Bayburt Castle belonged to Armenians, it is acknowledged by historians that Bayburt Castle, whose existence is noted during the Bagrat dynasty (885-1044), for some time played a part in local princes' struggles hundreds of years ago. Before the castle passed to the Turks, it remained under Roman, Armenian, Byzantine, Arab and Kommenos domination. 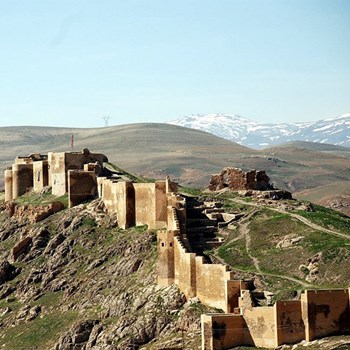 Bayburt Castle has a long history and has been rebuilt several times. For example, in the 12th century (765/1225), Tugrul Shah, son of Seljuk Ruler II.Kılıçarslan and Meliki of Erzurum had Bayburt Castle rebuilt which was fortified against attack from Trabzon Empire.

There are 17 Arabic inscriptions from the Tughral Shah period and one from Kanuni's reign, as well as two that no longer exist. The Akkoyunlu State held onto the castle for a while but abandoned it after being conquered by Suleiman The Magnificent 1514 AD. It was repaired again later on during Murat's rule.

The castle, which was occupied and destroyed from time to time, was also destroyed by Russians in 1828. "Chinaemachin Castle" is the name given to this castle. This is due to the purple and green turquoise tile decorations found both on its outer surface and within its walls. Today there are no traces left of these tiles due to both war and destruction.