Bandırma FerryPlaces to Visit in Samsun

Bandırma ferry was an Ottoman mixed-freight ship. She gained fame for carrying Mustafa Kemal Pasha (Atatürk) from Constantinople to Samsun in May 1919, which marked the start of the Turkish national movement.

The steamer Bandırma, built in Paisley, Scotland 1878-1883 and renamed Trocadero under five years of it being a freighter was sold to Greece's H. Psicha Preaus and changed its name to SS Kymi before going down following an accident but resurfacing under the name again. 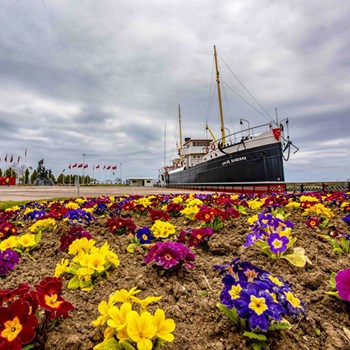 The Ottoman Maritime Company purchased the ship in 1894 and renamed it SS Panderma. It served as a passenger-cargo vessel in the Sea of Marmara. In 1910, its status was changed and it became the Ottoman Transportation Authority, with the name changed to SS Bandırma (which means Panderma). At this time, it served as a mail ship on coastal waters.

The Bandirma ship added to Turkish history when Mustafa Kemal Pasha, who was appointed shortly before Inspector of the Ninth Army Troops Inspectorate in eastern Anatolia, left Constantinople with SS Bandırma on 16 May 1919 for Samsun. The Scout Master was sent by Sultan decree to oversee the process of disbanding the Ottoman Army that was ordered by the Entente powers occupying Istanbul and controlling Turkish government.

Mustafa Kemal Pasha led a group of 22 officers, 25 soldiers, and 8 administrative staff on an old steamer to the Black Sea in 1919. The voyage was rough due to the heavy weather with no functioning compass needed for navigation. They arrived in Samsun and founded the Turkish National Movement that would lead to Turkey’s declaration as a republic four years later after its War of Independence from World War I not long after Mustafa Kemal Pasha left.

To commemorate its important role in the birth of modern Turkey, The governor and mayors of Samsun province both initiated the process to rebuild Bandırma. Beginning on May 9th 2000 by Taşkınlar shipbuilding company, construction took up to one year for completion. On May 19th 2003 at East Park in Samsun, The museum ship was opened to the visitors and wax figures of Mustafa Kemal Pasha with his followers are now part of the museum.