Balaban Bey Mosque is located in Kıgi Town, Bingol Province. It is the oldest historical structure that has survived until present day and it features a three-line inscription on its door stating how it was constructed in 1402 by Pir Ali Bey, son of İbrahim Bey, a son of Bayındır Han, son of Akkoyunlu Fahrettin Kutluk Bey. 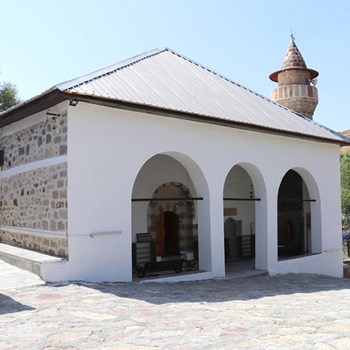 The mosque has one minaret and balcony. There is a main entrance north of the building that has an arched entrance doorway. The mosque also has another entryway on the east side, as well as two tomb graves in the narthex with three arches dating back to around 300 years ago. These are said to belong to Sheikh Haci Yusuf Efendi and Hacı Mehmet Efendi respectively, who were both from Kiğı gentry. In its courtyard there is also a tomb belonging to Hacı Mehmet from Zermek princedom in Turkish.

On the broken tombstone next to it, the Arabic numeral 1313 H. is read. Its mihrab has an ornament with three red tulips engraved on a green background. Its roof is in the form of a hipped roof and is covered with sheet metal. Its walls are made of smooth cut stone in the corners, and the other parts are rubble stone. Khorasan mortar was used. Stones of different colors and sizes were used in the corners. The upper parts of the windows are in the shape of a horseshoe.

The minaret in the northwest corner is made of cut stone and its upper part is conical. The interior ceiling inside it is wooden. Its door is on the minaret base, but due to repairs from 1734, 1768, 1794 and 1924, its historical features are being lost as people repair any damage as they see fit. In the old cemetery dated back to Ottoman times there are twelve-slice tombstones that have shaped like a turban or raft with inscriptions on them sporadically placed around it.