Baksı MuseumPlaces to Visit in Bayburt

The Baksı Museum rises near the Black Sea, 45 km from Bayburt on a hilltop overlooking the Çoruh Valley. This unusual museum offers both contemporary art and traditional handicrafts side by side under one roof. 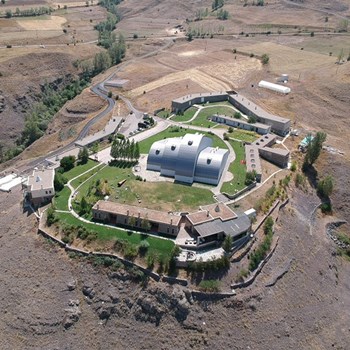 Covering 30 hectares with its exhibition halls, workshops, conference hall, library and guest houses, the Baksı Museum sprang up in 2000 as a result of Hüsamettin Koçan's imagination. The vivid idea was realized after he established a foundation in 2005. Many artists contributed their time to this project over years and crews from all professions gradually became involved. After construction on the museum had been underway for 10 years without any financial support from the government it was completed in 2010.

The Baksı Museum is a contemporary art gallery displaying the work of modern artists alongside local crafts. The purpose of the museum is to create an environment where traditional and contemporary folk arts can thrive as well as provide continuing education on cultural preservation for future generations.

The Baksı museum also aims to use art to breath life into Bayburt, which is one of Turkey's regions most impacted from migration and stimulate the economic life of the region.