Bafa Lake with its magnificent nature, history, mystical beauty, and serenity is one of the natural wonders to be seen in Turkey. The name of Bafa Lake's comes from the oldest language of the region and means "land of water". What makes it so special? The ancient ruins found in the Besparmak Mountains (Latmos Ancient City) show that the history of the area goes back to 8000 years ago.

The lake, which used to be a part of the Aegean Sea, has filled Latmos bay with alluvium carried by the Great River Meander. Today, it is located 16 kilometers away from where the great river flows into the sea. The Söke Plain, which was last covered by the sea 2000 years ago, is one of Turkey's arable regions, thanks to fertile alluviums carried by the Meander River. The region provides a significant portion of Turkey's cotton production and produces olives, figs, citrus fruits, wheat, barley. Bafa Lake is the largest lake in the Aegean region. Located 2 meters above sea level, it covers 60 square kilometers with a shoreline of 50 kilometers in length. It has a depth of 20 meters, but most areas are shallow enough for swimming. Here are some places to see near Bafa Lake Nature Park: 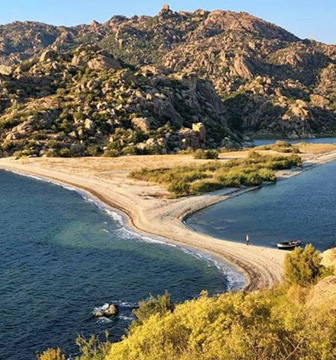 The Besparmak Mountains are well known for their metamorphic structure and rocky density. The mountains were formed as a result of wind and other natural factors, but sometimes rocks in the region were shaped by people living during the Neolithic era. Prehistoric frescoes can be seen on many of these rock walls--many are cave-shaped--and prehistoric engravings can also be found.

The village of Kapikiri looks down on Lake Bafa and the mountains. It is located 9 kilometers away from the coastline along the foot of Mount Besparmak. From Kapikiri, you can see parts of Lake Bafa, and it contains hotels and restaurants to stop by during your visit.

One of the most tranquil routes for tourists is a visit to Bafa Lake Nature Park and its surroundings. The lake which has attracted attention with its natural scenery and history, also has many bird species living there. Bird species have a greater need for shelter and breeding during autumn and spring months and Bafa Lake offers that to the birds. The Bafa Lake region is was declared as a nature protection area in 1994, and camping around the lake can be enjoyable for those who are into photography, birdwatching, or hiking.

There are several islands along Bafa Lake with popular sites including churches and monasteries. The Seven Monastery is located here and features magnificent frescos that depict scenes from Jesus' life story as well as scenic scenery. Botanical tours of local flora can be booked by guide at their own expense while Archeology tours through some ancient ruins are also available for those who want to explore these cultural treasures firsthand. For those looking for a little adventure, trekking tours are also popular in this area. Guests are advised to wear a hat and sunscreen as it can get quite warm in the summertime, especially when visiting during midday hours. The region is often inundated with humidity of up to 70% for days on end, so visitors should be prepared for high levels of heat before setting out!

Although geographically located on the border between Ionia and Caria, this city is typically considered a Carian city with its historical background. The city is named after Hercules, the famous mythology hero. The name of this town was Latmos in 8th century BC; it was also capured by Mausolus, the Persian Satrap. As a result of Alexander's campaign in Asia, it was subordinated to the rule of the Alexander Empire and then the Seleucids. Herakleia Ancient City which lost its importance after being cut off from the sea around 1 BC. After the severing of its connection from the sea in 1st century BC, it was left to decay and become largely under-populated. Consequently, it later became known as a place where Christians lived and sought refuge because traveling--or even being seen--by others were dangerous while the faith was outlawed by Romans until 4th century. 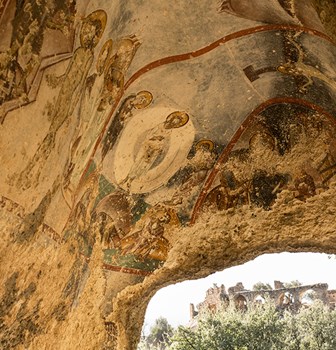 Built on very rugged and rocky terrain, the Latmos Ancient City is surrounded by 6.5 km long walls, which are reinforced with 65 towers. The city walls show regular rectangular and square stone workmanship and were built in the Hellenistic Period. Herakleia, which was inhabited according to the Hippodamos city plan, is one of many examples where a grid-shaped parcel and street plan that cut each other at right angles can be seen well implemented.

The Temple of Athena in Herakleia is one of the best-preserved structures in the city. It was built during Hellenistic times with two columns and a style typical of that time period. The Agora, located behind the temple, has two floors but only one floor remains today. There are other hints about life from this time as well—the buildings where shops were once housed still stand, while these south walls show how stonework had improved over previous years.