The Aydıntepe underground City is an ancient subterranean city in the rural district of Bayburt Province, Turkey. It is located 25 km (16 mi) northwest of Bayburt beneath residential areas.

The underground city of Aydıntepe is an extremely unique man-made formation. It features chambers, hallways and halls carved from volcanic tufa─stone without the use of building materials. The chamber size varies between 2-5 meters (6.6 ft.) below ground surface level and as such does not need additional construction support in order to uphold its structure. The small rooms are 1 meter wide by 2 meters high. 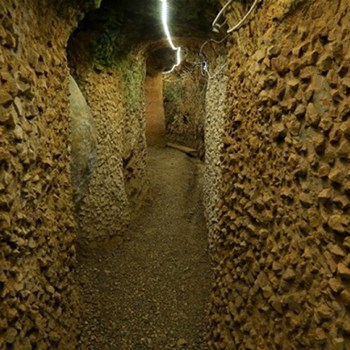 There are eight cone-shaped shafts placed over the hallway, which were most likely for observation or ventilation purposes. Some entrances and structures now inaccessible due to collapse or later construction.

A round piece of rock that's 1.5 meters in diameter stands at the entrance to close off the underground city from outside when needed. The tombs above and figures inside indicate a history stretching back 2 millenia, ranging from late Roman or early Byzantine times through up until Christian rule as well as Islamic rule.

Underground cities offer a safe haven from persecution as well as war. There are multiple features inside the city, such as cellars, storage rooms, water sources and a pool. The underground cities were fortified while still in use and once had a closing device and guard chamber that was an integral part of its structure.