Aya Tekla or Hagia Thekla or Meryemlik Church is a historic Byzantine era church located in Mersin Province, Turkey, which used to be popular for pilgrimage and still attracts visitors.

Influenced by Paul's sermons, Tekla renounced polytheism and became Christian. Because of her conversion, Tekla gained the hatred of all Iconians (today's Konya), especially from her family. Tekla, who became the subject of miracles throughout her life after accepting Christianity, was sentenced to death by the city administrators in Iconium and Psidia Antiochia (Yalvaç), but she escaped death thanks to miraculous developments. St. Paul gives Aya Tekla the task of converting Silifke and its region to Christianity. 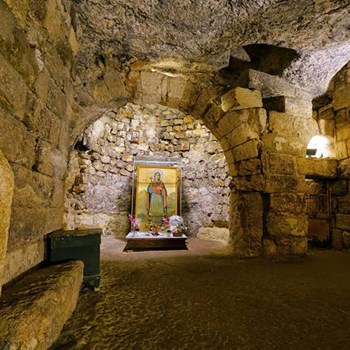 Aya Tekla, who devoted herself to the monotheistic faith, came to Seleucia (Silifke) and settled. She turned a cave where the current church is now located into a secret worship center in order to help locals and heal them. First, she was not adopted by the public, but with various medicines made it tried to heal Silifkians and succeeded.

It was the ability to miraculously heal that first made Saint Tekla famous during her time. Her reputation as a healer reaches all the way to Cyprus, in just a short time. Having grown up in an area where many people still believed gods and goddesses existed alongside one another, she then defeated Sarpedonius (god of war), Jupiter (god of thunder) and Minerva (goddess of wisdom--one example is Athena). After this victory Tekla then won converts to monotheism by using their own beliefs against them.

The notables of Silifke and the doctors, who are afraid and afraid of the power he gains day by day, decide to have Aya Tekla killed. 4-5 thugs are sent against Aya Tekla, but when they enter the cave, Aya Tekla disappears and is never seen again.

It is said that the cave was a monastery-like structure in memory of a traveling Spanish who stopped at Silifke on his way back to Spain after he became a pilgrim in Jerusalem. It was one of the first churches in the world.

In Aya Tekla Church, where other buildings were added after the official acceptance of Christianity, there are also the remains of the northern church, bath, cistern and tomb dedicated to Aya Tekla.

Aya Thekla was the only female martyr in Christian history that is now commemorated by both Catholic and Orthodox churches on September 23rd and 24th, respectively.