The most famous historical feature of Avanos, which is still relevant and very visible today, is its production of earthenware pottery. The ceramic trade in this district dates right back to the Hittites, with many different pottery factories in the area. It attracts visitors for its quaint old town with cobbled streets and views over the river. 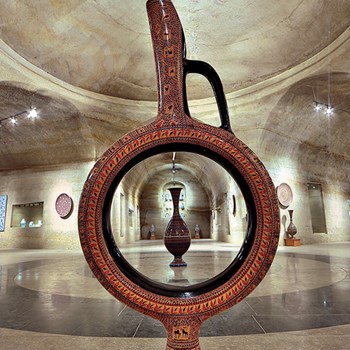 The first traces of human settlement in the area of Avanos have been found on the Zank Höyük mound, 4 km north-west outside Sarilar. This mound rises 30 meters above the surrounding plain and has a radius is 300 meters. The excavations at Zank Höyük unearthed Assyrian trade pottery from around 2000BC. The other researchers found more ancient ceramics dating back to the early Bronze Age. They also found Phrygian and Hellenistic period objects on the surface of the mound.

Avanos is best known for its pottery, which involves artists using clay they gather from the nearby Kızılırmak River. The local tradition of crafting pottery with red clay has continued for thousands of years.

While some historic buildings from the Ottoman period have been restored and given over to tourists, many others remain standing in total disrepair. One district of historic houses is located along Atatürk street, running parallel to the Kızılırmak River.

A few miles from the town of Avanos, a small cave was carved into the rock called as Dereyamanli Church. Inside is a simple room adorned with geometric designs in red and one that looked like the Star of David. Perhaps it was used as both temple and synagogue at some point in time, but its true purpose remains unknown. Construction on this ancient church started more than 1500 years ago, likely during the 5th century AD. It's noteworthy for being the only rock-cut church located in Cappadocia that still has active religious services conducted within its walls.