Sivas Congress and Ethnography MuseumPlaces to Visit in Sivas

The Sivas Congress Hall and Ethnography Museum, which is located in the heart of the city of Sivas, was a high school before it was converted into a center between 4–12 September 1919 for Turkish nationalists who were preparing their independence from occupying forces. 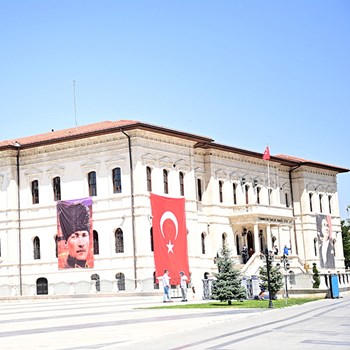 Following the 1919 congress, Mustafa Kemal Pasha and his friends remained in this building until December 18 of that year, when they left for Ankara. After their departure, it returned to being a high school. In 1930, it underwent a renovation. It opened its doors as the Museum of Congress in 1990 after undertaking restoration work for 6 years.

The three-story museum building is a prime example of Ottoman civil architecture from the 19th century. The basement laboratory, photo gallery and storage areas are reserved for scientific purposes. Located on the ground floor, the ethnography section houses weapons in one room; while located on the upper floor at Atatürk and Congress section.

Another room, named Hacı Beslen, houses ethnographic items such as coins, calligraphy, and paintings. In another room is a collection of Sivas rugs and a 12th-century wooden mimber (pulpit) from Divriği castle mosque. Another room named başoda, or "headroom," represents the guest room of wealthy citizens in Ottoman-era Sivas. Items from Divriği Ulu Mosque are also exhibited here. Copper works, tekke articles and clothes are found in other rooms.