Aşıklı Höyük is a settlement mound located 1 km south of Kızılkaya village on the bank of the Melendiz brook, and 25 kilometers southeast of Aksaray province. The archaeological site of Aşıklı Höyük was first settled in the Pre-Pottery Neolithic period, around 8200 BC.

Aşıklı Höyük is situated 1120 metres above sea level, a little higher than the region's average altitude of 1000 metres. The surrounding landscape was formed by erosion caused by rivers into tuff deposits. This fertile and diverse habitat surrounds the Melendiz Valley, where Aşıklı Höyük is located. Nearby obsidian sources had made it an important area for trade in resources that were sent as far away as present day Cyprus or Iraq. 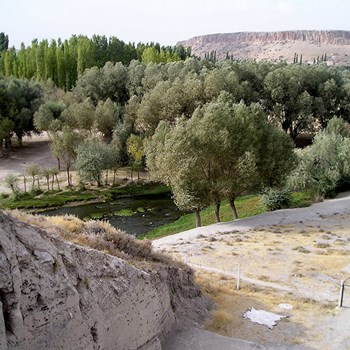 Aşıklı Höyük is the first known village in Central Anatolia, and besides being a hunter-gatherer community is also among the first agricultural communities.

The traditional architecture of Anatolia is best and first exemplified by the adjacent rectangular mud-brick structures seen at Aşıklı Höyük. A historic first happened here-the world's first brain surgery was performed in Asikli Hoyuk and the skull with surgical scars is on display at Aksaray Museum

The people of Aşıklı started to farm grains and plants that they had previously collected in the wild once they settled into their new homes. Carbonized layers during excavations have unearthed both types of wheat, barley, and lentils - those that were cultivated and those which had been gathered from natural sources.

The animal remains found in the excavations show that the most frequently hunted animals by the residents are sheep, goats, wild cattle, pigs, red deer and roe deer.

Obsidian, a type of volcanic glass, originated from the geological formation in this region. It has been the raw material for tools and weapons and was used by people in Aşıklı to carry out all kinds of daily activities such as hunting, butchery, shieldmaking and leather work.

After excavating more than 400 buildings, only 70 people were found buried. The dead were buried under the floors of the residences, and these burials occurred while those buildings were occupied. There was a variety of postures for the deceased: some in a fetal position, others stretched out left or right to face upwards. Others are found lying on their side, occasionally with bent knees. The orientation of the burials varies and so does the number of individuals inside them.