Asarkale Rock Tombs are located about 30 kilometers south of Bafra District and near the Altınkaya Dam in Samsun. A stairway leads up to a stone fortress that has secret passageways and hidden havens often used as hiding places. 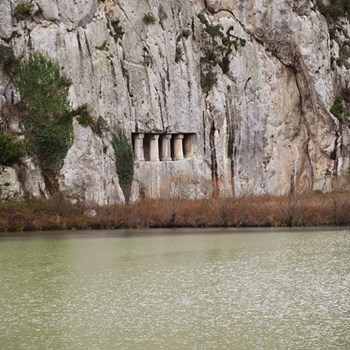 Asarkale, located in the Paphlagonia Region, was strategically and purposefully built for military purposes. Tombs dating back to the Hellenistic Age were carved into bedrock while fighting continued to evolve. It is thought that three tombs belong to this time period because of their texture and shape as well as construction techniques.

There are 3 rock tombs, dated to the Hellenistic Period in 3rd century BC. One tomb is accessible at the river side and two others are on a slope of ancient castle's hill. The tunnel originally built for military purposes gave access to river before asphalt was used in building roads.

The first tomb is on the steep slope to the north of Asarkale and is quite high above the road level. It is a typical example of Pontos-Paphlagonia rock tombs with its triangular pediment and five columned façade. The second tomb is on the steep rock on the east bank of Kızılırmak and has four columns and a triangular pediment. The third tomb with four columns is on the rock to the south of Asarkale. It is still higher than the road level and is in the other two types of tombs.