Anzer Plateau and HoneyPlaces to Visit in Rize

Anzer Plateau is a plateau located 35 km south-west of İkizdere district of Rize. It is divided into two sections as Lower Anzer (Çiçekliköy) and Upper Anzer (Ballıköy). The plateau is 54 km from the city center of Rize.

The region attracts both foreigners and locals due to its natural beauty and being the center of local honey, as well as housing many flowers native only to this region. 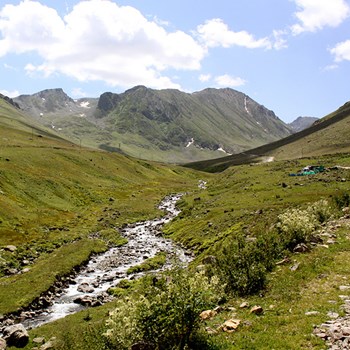 Anzer Honey produced in Turkey and having the world's most diverse flora, British-German botanists have researched 450-500 kinds of flowers. Among those 80 to 90 endemic flowers only grow at Ballıköy Anzers and honey collected by bees from these flowers is said to be the cure for all diseases.

The first week of June, snowdrops bloom throughout the snowy regions. The two months following that are full of splendor; bees begin to collect nectar by the beginning of July and their honey is completed in August.

Depending on how good the weather is, beekeepers usually harvest honey from hives either in the first or second week of August. The amount of honey produced can change depending on the effect of bad weather and early mowing of meadows (grass). There have been years where there was little to no production. That's why, Anzer Honey is one of the most expensive honey in the world.

Anzer honey is not considered a normal ingredient to add to bread for breakfast. Rather, it is used in the healing process of many illnesses. You can not eat more than 2 tea-spoons in a day, otherwise it can be life threatening.