Anemurium is an ancient city near the modern Turkish city of Anamur. It was in the Roman province of Cilicia and only 64 km far from Cyprus. 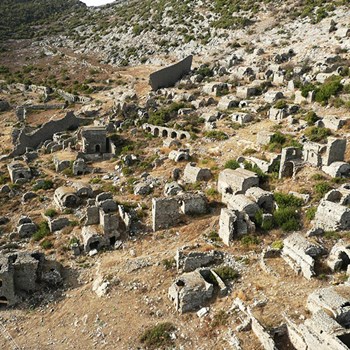 Anemurium was the melting pot of civilizations throughout history. Today, it is a worth-seeing site ornamented with ancient relics and sea landscape. Anemurium was used as a way station especially in the age of Roman Empire because of its close location to Cyprus. The city was connected to Germaniopolis, a prominent Roman city, with a road and it was an important trade center where natural sources of the region were exported. Although the golden era of Anemurium ended due to Persian invasion in 260 A.D, there are many ancient relics left behind from Ancient Greece and Rome that can be seen today when visiting this site for tourists such as:

The acropolis of the ancient city is protected on three sides by steep cliffs, and to the west it has a wall with towers. The lower town extends for at least 1500 m northwest from the acropolis.

The discovered remains include a small theater, an odeon or meeting hall of some sort, three large public baths and one small one, all with mosaic floors. Some of the larger rooms have been converted into industrial use in late antiquity. There are four early Christian churches as well, some with its own unique mosaic flooring pattern and donor inscription. Lastly we found an exedra that resembles either a civil basilica or law court.

The extensive necropolis has 350 sepulchral monuments from 1-4 centuries. Some of these include several rooms, a second storey and even an inner courtyard – decorated with mosaics and wall paintings.