The Andaval Church is located in close proximity to the Nigde province on the main Nigde - Adana highway. The Church is a beautifully painted medieval Byzantine church that houses a 1000 AD stone church built inside of an earlier 6th-century basilica. However, the church's structure also includes decades of history from an old Hittite site. Even though there has been many deformations in the church, you can still see beautiful paintings that depict Biblical scenes. 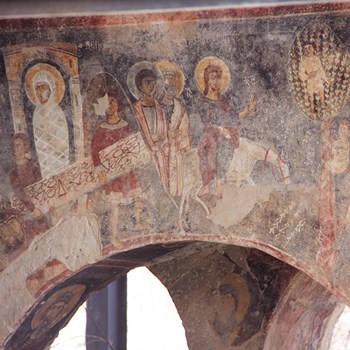 A late Hittite inscription discovered at the base of this church, dating back to 9th century BC, proves that it was originally a building from The Late Hittite Kingdom period. A basilica was originally built on this Pagan religious site in the 6th century. In the 700s and 800s, a basilica that had been originally constructed in the 6th century was destroyed and burned during Arab raids. The church settlement may have been abandoned during this period of Byzantine decline.

The three-aisled basilica church evolved into a barrel-vaulted, single nave church at around 1000 AD and lovely paintings have been added onto the walls of the new church. The nave's walls were plastered and fully painted with detailed, well-preserved images.

The western wall has the best-preserved and probably the most important painting: The depiction of Mother Mary holding baby Jesus. The murals of St. Constantine and Archangel Michael are damaged in this part.

The other paintings that you can see in the church are: The Nativity, Adoration of the Magi, Joachim and Anna (the parents of Virgin Mary), Raising of Lazarus, Entry into Jerusalem and Angels.