AmasraPlaces to Visit in Bartin

Amasra is small port town and tourist destination in the Bartın Province of northwest Turkey. The town was formerly known as Amastris.

The town is today well-known for its beaches and natural setting, which has made tourism the most important activity for its inhabitants. In 2010, the population was 6,500. Amasra has two islands: a bigger one called Büyük ada ('Great Island'), and a smaller one called Tavşan adası ('Rabbit Island'). 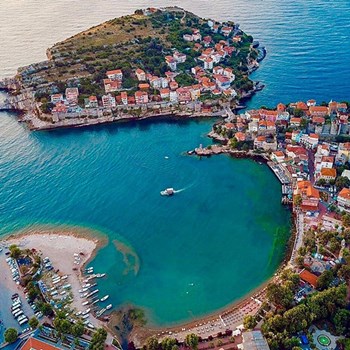 Strabon claims that Amasra, which was known as Sesamos in the past, was founded by a Scythian tribe called Gasgas or an Amazonian branch to clear the Hittites away from the Western Black Sea.

There is a fine small archaeological museum by the sea with remains from both land and underwater. Of particular interest is a statue of the snake god Glykon, a false creation during Roman imperial times.

Amasra Castle was built during the Roman period and the walls were built by Byzantines. The front walls and gates were built by Genoese in the 14th-15th centuries, but because of its location on a narrow peninsula they had to build a tunnel under it that led to fresh water at ground level.

The Fatih Mosque in Amasra is originally a Byzantine church from the 9th century AD. The narthex section consists of three parts and was converted to a mosque shortly after it was conquered by Sultan Mehmet in 1460.

The ancient lighthouse of Direkli Kaya, where Princess Amastris from the Persian Empire swam, should be visited if you want to see a beautiful city. The best spot for viewing Amasra is at Bakacak Tepesi (Hill).