During the Roman Imperial Period and especially in the second century AD, as major urban centers were constructed in Anatolia and famous public monuments were built nearby such as the Asklepion of Pergamon, many notable structures at Allianoi date from this period. Besides baths, bridges, streets, quarters (blocks), public buildings including a Connection Building and Propylons there also was a Nymphaeum during this time. 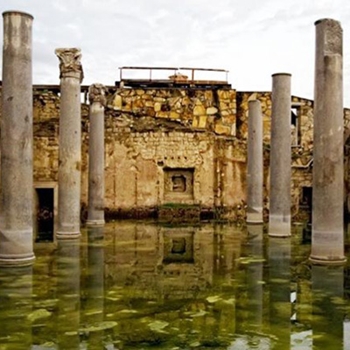 During the Byzantine period, Allianoi was densely populated despite some fraying in the socio-economic fabric of the urban settlement. Some architectural elements of the Roman Period were reused by Byzantine populations to build newer dwellings. Allianoi’s most important buildings such as the thermal baths and nympheum remained in use for many years. A large church reminiscent of a basilica was constructed to the east, while chapels were built throughout Allianoi. Metal, ceramic and glass workshops all date back to this time period.

The site was known as the Thermal Baths of the Pasha in the Ottoman Period. Usage seems to have been limited, with only a few coins scattered within an archaeological survey. In the early 20th century, a sub-governor of the region initiated an effort to refurbish and make use of the spa complex. In addition, back across the Ottoman era right on up to 1979 when it was closed off by Turkish government regulations, people would cross over using a bridge situated west of Allianoi ancient city.

The bath complex was partially cleaned of accumulated silt in the early 20th century. Despite continuous flooding, the hot springs section was in use during 1950s. In 1992, Roman Bridge that was also still in use was reconstructed with some distortions, disregarding the interests of conservationists.

Turkish State Hydraulic Works devised a plan in 1994 to dam the Ilya River and create a reservoir for agricultural productivity. However, this would include submerging Allianoi into the reservoir and cause it to be flooded sharply. There have been numerous protests but their efforts have not stopped Turkish State Hydraulic Works from persisting with its original plan.