The ancient city of Alinda is located twenty kilometers west of Çine, Aydin in modern Turkey. Although there is little information about Alinda, it was still one of the important Carian cities.Alexander the Great discovered in 334 BCE that a conflict existed between Prince Pixodarus and Princess Ada, both of whom sought to rule. He sided with Princess Ada when she surrendered Alinda, a mountain fortress above fertile plains in Caria. In return, Alexander recognized her as satrap of Caria and freed her from finishing siege operations at Halicarnassus.

Princess Ada's popularity ensured the Carians' loyalty to Alexander, and Alinda may briefly have been called "Alexandria by Latmus". This town is not well-known and it is uncertain if this town is identical to Alinda. If this story holds any truth of reality, we know that a statue of Aphrodite by the Greek sculptor Praxiteles was erected in a sanctuary dedicated to Adonis. 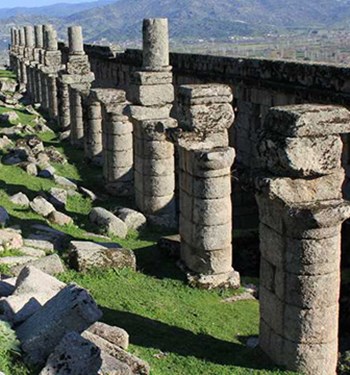 Alinda became Hellenized quickly. By 255 BCE, the Seleucid's established a garrison at Alinda. At the summit of the city's acropolis, parts of Hellenic walls and a two-storey square tower are still visible. The city issued its own coinage from 190 BCE until 230 CE. After the disappearance of the Seleucid Empire, Alinda must have changed hands frequently, but eventually it was Roman during 67 AD to 214AD.

The Agora (Hellenistic market) building is located north of the modern town, and can be accessed by a steep slope. The first level consisted of pairs of individual shops, one behind the other, which opened onto a terrace to the south. The second storey was divided with a double row of columns and formed a single long hall. The top floor had access to an open agora that was 30 x 30 meters in size.

Further up the mountain is a largely intact theater, which dates back to the early second century BCE. It could offer accommodation to some five thousand people and was renewed during the reign of emperor Augustus. There were thirty-five rows of seats. Beyond it is an acropolis with Hellenistic walls and a superb tower that may have been connected to the theater by a tunnel.In a valley to the west, there is still visible evidence of an impressive Roman aqueduct.