Alaeddin MosquePlaces to Visit in Nigde

The Niğde Alaaddin Mosque was built in 1223 during the reign of Keyqubad I, a Sultan of the Seljuks and predecessor to Ottoman Empire. The chief architect for this mosque is Sıddık, who was an assistant with his younger brother Gazi.

The building is constructed out of cut stone. There are two doors: a monumental one on the east side, and a smaller one on the north side. On the south end there are three domes and an old minaret in the corner. 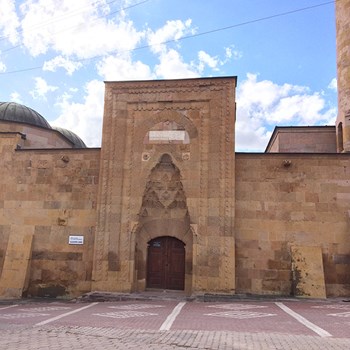 The mosque's most striking art is the portal, which is a sample of the traditional Seljuk leaning roof style. The most noteworthy property of the portal's East-facing side is that at 10 AM to 11 AM at certain times during summer seasons, sunlight projects an image in the shape of crowned woman’s head. The Seljukian mosque's portal is, in its own right, an architectural highlighted point. Its name derives from a statue of the woman's head at the top with her crown and hair knitted.

According to the legend, the master constructing this mosque loved the daughter of the princess who lived in Niğde at that time. However, he knows pretty well that he could never marry the princess, but since he has an opportunity from the Governor to start construction on a mosque in the city, he decides to reveal his feelings. When describing his love to the princess, he processed her portrait beautifully on the marble portal.

The mosque includes all features of the Classical Seljukian Mosque Architecture in their original forms. Having completely geometrical ornamentation, this mosque is significant for presenting the first examples of Anatolian stone ornaments. The star-shaped geometric patterns on the Eastern Portal reflect a Seljukian quality that appeared just before such decoration became popular with other mosque architects.

With the other historical buildings around the mosque, the Mosque of Rahmaniye, Sungur Bey Mosque, the Covered Bazaar of Sokullu Mehmet Paşa, Nalbantlar Fountain, Armenian and Greek Churches, Alaeddin Mosque has been added to the Tentative List of UNESCO in 2012.