Alaeddin Hill and Alaeddin MosquePlaces to Visit in Konya

Alâeddin Hill is an archaeological site where the city was placed 3 thousand years ago during the Early Bronze Age. The Hittite Empire started there in 1190 BCE, but after its decline it passed on to Phrygians, then Lydian Kingdom in 547 BC before being conquered by Achaemenid Empire.

When the Eastern Roman Empire was at its peak, Iconion was the administrative seat for a number of large towns and villages. The town’s fortifications were rebuilt during this time around an enlarged hilltop perimeter. 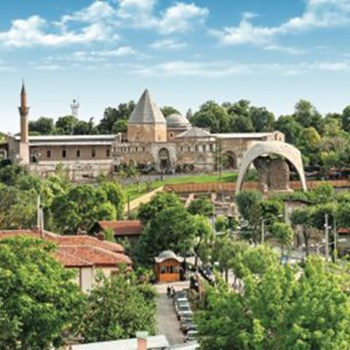 One of the most significant surviving buildings in this part of the city is shown as the Alâeddin Mosque and its cupolas on top. This mosque, whose construction was completed in 1220, takes its name from Seljuk sultan Alaeddin Keykubad I. The mosque resembles a miniature place when viewed from the north, and contains rooms for worship, tombs, and courtyards. However, one thing to note is that the mosque consists of three separate parts with different characteristics.

On the south side of the hill, there was a neighborhood where Greek and Armenian communities lived until the beginning of the 20th century. The adjacent churches of these communities disappeared in the 1920s. Today, an army headquarters stands on their place.

Next to the mosque, there is a fountain and water reservoir built by Konya Governor Ferit Pasha in 1908. On the part of the hill overlooking the Mevlana Complex, Martyrs' Monument is located which was built in 1936.