AlacahoyukPlaces to Visit in Corum

In 1835, W.C. Hamilton first discovered this archeological site and it has since become an area of interest to the world’s scientists who visit central Anatolia.

Alacahöyük was inhabited continuously since the Chalcolithic Age, and it has four layers of culture up until the Hittite-Phrygian age. Each layer has 15 different architectural layers: The Chalcolithic Age: 4000-3000 B.C., layers 15-9 Old Bronze Age: 3000-2000, layers 8-5 Hittite Age: 1800-1200, layers 4-2 Phrygian Age: Since 750 B.C. in the first layer The first settlement in the tumulus was established over an area that was at a higher elevation than sea level and benefited from protection on both its southern side and small hills to the north; it used temperate materials for construction including stone foundations, sun-dried bricks, reeds as roofing material. 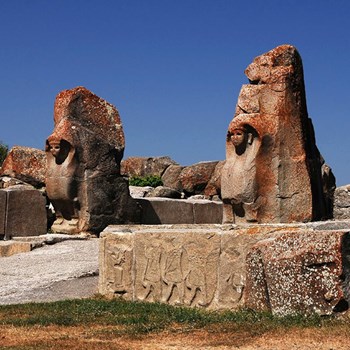 There are thirteen important tombs in Alacahöyük from the Old Bronze Age that are followed by a Chalcolithic age that had four layers. The tombs belonging to layer five and seven are located in a special area of the city.

These tombs are unique to Anatolia, representing the most ancient of burial rites. These tombs belong to adult males and females; there is no evidence that they were used for children or infants. In contrast with Central Anatolian tomb types, these graves at Alacahöyük lie in a uniform direction: east–west (inclining south).

The diverse range of gifts buried with the dead is extraordinary and includes sun disks, deers and bulls sculptures, decorative pieces, fighting tools such as daggers, swords and axes made from various materials including cooked clay, stones, gold, silver, bronze and copper.

The architectural system in Alacahöyük during the Old Bronze Age depended on the authentic building technique of Anatolia. Buildings constructed with this technique were made up of stone foundations, sun-dried bricks, flat ceilings, plastered floors and roofs that were created from earth.

The Hittite layers visible in Alacahöyük are made up of three distinct layers. These layers represent a defence system in the form of an approximately 250-metre diameter circular enclosure, with two entrances found on either side. One entrance is located near the eastern door at a location where there's a sphinx sculpture and another due west by the tumulus' mound.

There are two sphinxes carved on the eastern door that were once seen as religious representations. The heads of these mythical beasts have remarkable detail, and each has inflated bodies with short legs. In addition, there is a double-headed eagle carrying a rabbit in his claws inside the sphinx too.

The reliefs on the eastern and western sides of the door with sphinxes are done in low relief and detail was added. Almost all of the orthostats in the western tower form a single frieze. On the lower part, there are depictions related to cult-libation; on the upper part there are scenes from hunting expeditions. The head priest, the king and queen were depicted as praying in front of a bull during a holiday ceremony to honor the storm god and that appears in Hittite texts. Pictures on other reliefs show different phases of the ceremony with people praying before a goddess.

After walking in through the door with the sphinx, you can follow the entrance complex to your right and see the foundation of a large Hittite building. Made up of various storage rooms and other complexes, it's known as Mabet-Saray (Temple-Palace).