Alabanda Ancient City, about 7 kilometers west of Çine in modern day Turkey and founded in the 4th century BCE. The name may come from the word "ala", which means horse, or "banda", meaning victory or competition.

Like the rest of Caria, it was part of the satrapy (administrative area) of Maussolus, who was the son of Hecatomnus, a Carian aristocrat who had in 392/391 obtained the satrapy of Caria from the Achaemenid king Artaxerxes II Mnemon. This means that it was under indirect Achaemenid rule. The town boasted a temple to Zeus Chrysaor.

After the conquest of Alexander the Great, it underwent rivalry between his successors - Antigonids and Seleucids. At the end of the third century BCE, people began to call it Antiochia of Chrysaorians. However, after king Antiochus III lost at Magnesia to Romans (190 BCE) this name was dropped from usage. 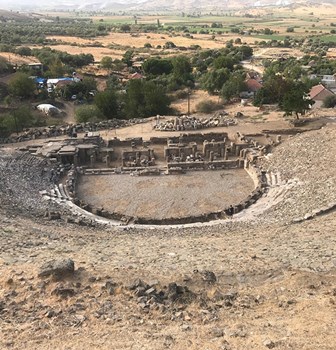 The treaty of Magnesia, which is a peace pact between Romans and the kingdom of Seleucid in 190 BC, assured that Seleucid domination came to an end. In 40 BCE, Roman rebel Quintus Labienus and a Parthian army occupied the city. The citizens slaughtered Labienius’ garrison after they looted Alabanda of all its valuables before retreating. After 40 CE, under Roman rule for about 250 years, Alabanda prospered.

Ancient city walls surrounded an area of 4-5 square kilometers. Hellenic parts of the wall are still visible, with their towers. Sections of the old agora (112 x 72 meters) have been identified; just north of it is a rectangular building (22 x 35 meters), which served as a multifunctional meeting hall and beyond that, the main gate can still be seen.

South of the agora, and just west of the modern village of Doğanyurt, are the remains of a temple that was built in Ionic style in the 2nd century BCE with dimensions 35 meters wide by 22 meters long. An inscription confirming that this temple was dedicated to Apollo Isotimos (meaning "equal in honor" to Zeus Chrysaor) and divine emperors. Distant parts of a frieze portraying an Amazonomachy (a fight between Greeks and Amazons) were recovered at this site.

To the southeast of Doryanyurt lies a Hellenistic theater, which had nineteen meter wide façades. It is well-preserved. In addition to this, on the south slopes of the city there still stand foundations from what was probably a second century BCE temple dedicated to Artemis.

Outside the walls, there is an ancient cemetery with many tombs. Inscriptions on some of the sarcophagi indicate professions--what they did for a living.