Ala MosquePlaces to Visit in Osmaniye

Ala Mosque is one of the best-preserved examples of ancient settlement in Osmaniye. The site has traces of Roman, Byzantine, and Turkish-Islamic cultures as evidenced by excavations carried out by the Directorate for Osmaniye Museum.

Before it became Ala mosque, the building was used as a monastery and centre of Christian worship. Due to extensive renovations throughout the years, it is difficult to say exactly when Ala mosque was built. However, we can be certain that it has served as a mosque for many generations since its convertion in the late fourteenth century. 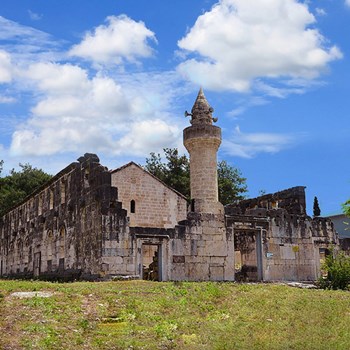 Results from the studies show that the Ala Mosque has four phases:

First Phase (Early Byzantine Period): The earliest remains, mosaics on the north of this site. There is a platform with mosaics and spolia flooring (columns and decorative architectural pieces from other older buildings) leading to Ala Mosque's steps.

Second Phase (Middle Byzantine Period): During this period, the building was converted from a basilica to a single-nave chapel. The apse part of the south half of the building was closed with a wall and rows of columns were placed inside.

Third and Fourth Phases (Dulkadiroğulları and Ottoman Period): The north part of the building now has a two-part cistern, which may indicate that pipes and waterway found in the east are related to it. The Arabic inscription on its south wall says "Word-i Tawhid" with an accompanying word. With this inscription, the cistern must have been used in the Ottoman Period as well. A ceramic kiln was found close to the building, and it is thought that many garbage pits were opened on the site especially on the west and south sides during this period.