Aktekke Mosque (Aktekke Cami) is the focal point of Karaman and includes baths, a mausoleum and room for dervishes. The building forms part of an oasis in the middle of town while being surrounded by cemeteries on all sides. 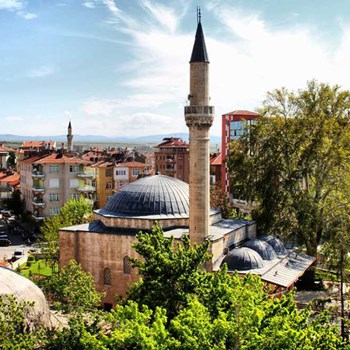 The great Turkish mystic and Sufi, Mevlana Celaleddin-i Rumi, came to Karaman with his family in 1222. There he was married and stayed for seven years before travelling to Konya with his father and family. The structure is also known as the Mader-i Mevlâna Mosque, as the tomb of Mümine Hatun, Mevlana's mother, is located in this building which a public cemetery called Aktekke cemetery . On the left-hand side inside the mosque (which has been around since 1370), there are 21 stone sarcophagi belonging to Mevlana's mother; elder brother; other relatives who died during their stay in Karaman.