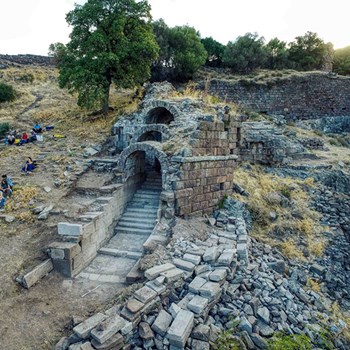 Initially the city, which was once a possession of Lydian and Achaemenid Empires, fell to the Kingdom of Pergamon and eventually into the hands of Seleucids. The city was once devastated under the rule of Bithynia, but after a peace treaty was brokered by Rome it was compensated with 100 talents (unit of weight in ancient times). Under the patronage of Pergamon, a market building and temple to Apollo were constructed.

Pergamon became a Roman province in 129 BC. In 17 BC, the city was destroyed by an earthquake and had its reconstruction financed by Emperor Tiberius. One of the 12 ancient Aiol cities in western Anatolia mentioned by Herodotus is Aigai. Excavation has been carried out intensively since 2004 at the city, which was damaged and repaired following an earthquake in 17 BC. Historical records suggest it was an important commercial centre in Hellenistic times.

In 2018, the excavations were taken place at the Vomitorium (Theatre entrance building). The city walls were built according to the condition of land. Within ramparts there are three-storey agora and walls carrying this structure, ruins such as parliament building, terrace walled stadium, theater and Domitian temple.