The Aidesim Mosaic Basilica, which is approximately 200 meters southwest of Oylum Höyük, belongs to the Early Christian Period. Black basalt stone and limestone make up its construction materials, dating it to the 6th century AD. The interior is made up of three naves with two rows of columns running down each side; its entrance is on the west side. 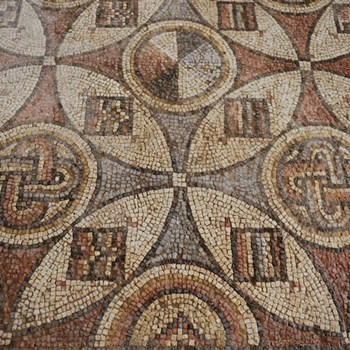 At the end of an excavation, a large amount of Roman and Medieval coins, column bases, and various artifacts were found. Floral motifs created with 5 different colors (red, white, brown, gray and black), as well as intersecting circles. One mosaic cover 800 square meters in design; its geometric nature consisted mainly of square motifs and zigzag motifs- Maltese cross intricacies were incorporated into shapes that are themselves common in Early Byzantine mosaics: Square or lozenge overlap is present between many designs seen on this floor mosaic.

It is understood that the mosaics are in excellent condition and to prevent them from being damaged, preservation work started a few years ago and has been completely finished in 2017.