Ağzıkarahan Caravanserai is a historic Seljuk-era caravanserai in Turkey. It is located in Ağzıkarahan village about 20 kilometers far from Aksaray city center. 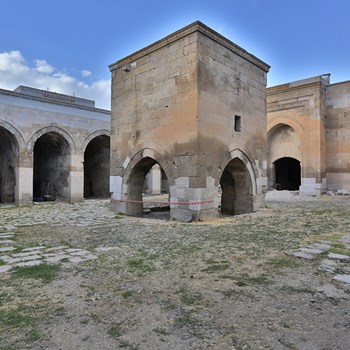 The caravanserai is considered one of the most exquisitely decorated examples of an average, non-royal-family-funded caravanserais. The building's foundation was formed in June 1231 under Sultan Ala ad-Din Kayqubad I and the courtyard was developed during February 1240 under his successor Kaykhusraw II. The patron who commissioned the construction was named Mes’ud, son of Abdullah.

Similar to other major caravanserais of this era, the structure consists of two parts: one open-air courtyard and an indoor area. The main entrance is a monumental portal which leads to the central courtyard, around which are various rooms.

The small mosque in the middle of the courtyard is an excellent example of a four pillared, vaulted structure that features prominently in other caravanserais. The square stone chamber which serves as the indoor mosque has been lost to fire and its entire interior now consists of empty vaults with one exception: there are two vaulted passageways on either side from which empty chambers open.