Men rocks, or Adam Kayalar, is located 5 kilometers from the Kızkalesi District of Mersin and consists of large reliefs. These reliefs carved into the slopes of the valley attract attention from everyone who sees them. The history of them goes back to ancient times.

Adam Kayalar is the name of these reliefs, which are estimated to have been made between 300 BC and 300 AD. Adam Kayalar is found in two locations. The first is the rock reliefs carved into the rocks of Devil Creek Valley, and second can be seen in northeast section of valley where you find remnants from castle, bastions and settlements. 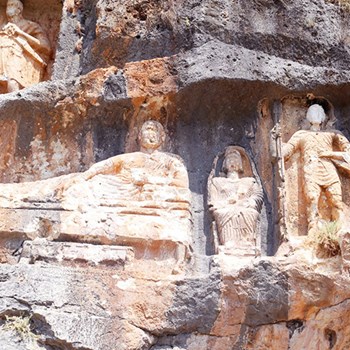 The examination of Adam Kayalar, which has been hypothesized to have been built in 250 years , resulted in the understanding that the names of priests who died were written on the inscriptions under the frames. Based on these names, it is said that writings from 2nd century AD are carved into reliefs when the construction phase is assumed to be 250 years. The differences in style between reliefs from different ages also reflect this difference fairly well.

There are 11 men, 4 women, two children, a mountain goat and a Roman eagle in 9 frames on the reliefs. The purpose of these reliefs is to show gratitude for the important people whose acts have benefited their society and individuals.

Although these reliefs have sustained damage from treasure hunters, natural conditions, and no protection for an extended period of time, they still attract the attention of both local and international tourists.