Adada is an ancient city and archaeological site in Pisidia, north of Selge and east of Kestros River. The location can be found near the village of Sağrak, west of Lake Egridir.

The city is dating back to the 2nd century BC based on an agreement document found in Termesos. This friendship agreement between Adada and Termessos, another important town in the region, was signed against Selge, a common enemy of the towns. Historical sources say that Selge, especially during the Hellenistic times, followed an imperialist policy against Termessos and the agreement put forth that Adada and Termessos would help each other in fighting against Selge. 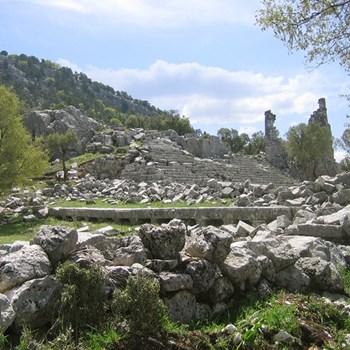 During the Roman Imperial Periods, the periods of Emperor Traianus, Hadrianus and Antonius Pius were bright periods for Adada Ancient City. There is an ancient road with a stone floor, the Temple of Trajan, the Temple of Emperors. The temple area includes the Temple to Zeus Megistos-Serapis in the city.

There are also a forum, basilica, acropolis, monumental fountain, administrative building, open-air meeting place theater and grave monument. The acropolis is between the city section and valley was built for defensive purposes.

There are fortifications and towers surrounding the acropolis. There is an open-air meeting place for city meetings in the western part of the site. The forum and basilica, which later became a commercial center of sorts, were built in front of this meeting area.

The Adada Forum occupies an area of 32x45meter. There is a cistern in the middle of the forum that's surrounded by smooth stone walkways, and three stoas on each side. The basilica is in the east-west direction to the north of the forum. Finally, there's a monumental fountain at the southeast part of it all.