Acmonia ancient city is located in Banaz town of Usak province and built on a high hill on the Lydian King’s Road. A considerable amount of mosaic was found in the city, and there are Roman and Byzantine ceramic pieces, a gymnasium area, building foundations, two temple podiums, theater pits and architectural stone-marble fragments.

Anciently, Acmonia was the seat of a bishop. This is alluded to by records from the 10th to 13th centuries as recorded in Byzantine-era documents, including a list of its bishops and their names known for this time period: Gennadius (who transferred in 381 to Antiochia); Optimus; Theotimus; Paulus; Eustathius; and some others. At Chalcedon, Gennadius took part in the Council in 451. At Constantinople, he signed against simony and at Nicaea II he helped decide date of Easter each year (planetary computations). 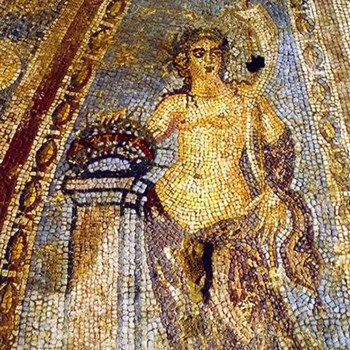 Investigations in Acmonia show that the city has never had any scientific research or excavations. A rescue excavation was carried out by the Uşak Archeology Museum to protect mosaics on a gymnasium floor that were discovered as a result of illegal excavations in 2000. However, The excavation of the ancient city site was interrupted by an incident where mosaics were abducted and destroyed.

As understood from inscriptions uncovered, Acmonia appears to have been an important Jewish settlement during the 3rd century BC and 3rd Century AD. The Jews may have even governed the town as Emperor Severus and Coracalla allowed the Jews to control state offices in Acmonia.

The city is surrounded by fortification walls, and there is a Roman theater in the northeastern part facing the village. In addition, it was understood from inscriptions on floor mosaics of the gymnasium that sports games such as wrestling, volleyball and boxing were held in Acmonia during the 1st century AD.