AcemhoyukPlaces to Visit in Aksaray

The ruins of Acemhöyük are situated 18 km northwest of Aksaray on the southeastern end of Tuz Gölü, in a fertile plain. The city is divided up into two parts: one settlement located on a hill which measures 700 meters by 600 meters and the other is located below it which covers part of modern Yeşilova village.

The highest point, the citadel, rises 20 metres above the surrounding land and is now called Sarikaya (yellow cliff) on account of the gleaming yellow mudbricks. The tell is to the south of the modern village and in the centre there was once a modern cemetery.

Past archaeological excavations have revealed that there are at least 12 floors belonging to the Old Bronze and Assyrian Trade Colonies Ages in the mound, and that the Lower City was inhabited only during this time period. While it developed gradually from the 25th century BC until 18th century BC, it is best known for its heyday in the Age of Assyrian Trade Colonies. A fierce fire (cautery) engulfed most of what was left of this period's greatness due to an unknown cause. 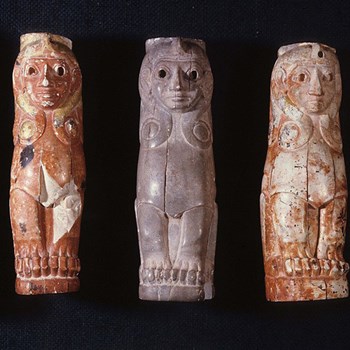 Though, the city was rebuilt two more times by survivors of this disaster in 18th century BC, it was abandoned completely in the 17th century BC. The last survivors spent their time focusing on settlements around the western and southern elevations of the mound from 6th century BC until Roman Period began.

Archaeologists discovered the site of a former palace, called Sarikaya Palace, on the citadel. That western part had been destroyed by later settlement and modern activity; only 1.5-2 metre thick walls are left. The palace must have contained around 50 rooms (details about the number is uncertain because of subsequent destruction).

The northern, eastern and western sides of the building were surrounded by a portico that was made of marble bases with wooden pillars. The ground floor of the building was used for storage purposes. Clay bullaes (seals) were found in all rooms. It is assumed that officials had their suites on the upper floor, as at Kültepe.

Archaeological evidence has determined that Acemhöyük once served as a pre-modern industrial center for metal production. So far, excavation efforts have uncovered silver and copper ingots used as forms of wealth in trade, ornaments made from various metals including gold, bronze, lead and more. Excavation areas outside the city have also yielded discoveries relating to human settlement over millennia.

The Pratt Ivories or Acemhoyuk Ivories are a collection of ancient furniture attachments from the early second millennium B.C. They were discovered in Anatolia and donated to the Metropolitan Museum of Art by Mr. and Mrs. George D. Pratt between 1932-1937. A preserved set of four sphinxes, three lion legs, a falcon, and two recumbent gazelles comprise the earliest (and most complete) evidence for a luxury chair or throne from the ancient world - many of the other pieces likely belonged to smaller decorative objects. These pieces were originally from Acemhöyük, where they were looted and eventually sold on the antiquities market.