The Yag Mosque, or Oil Mosque, is located in the old town of Adana, Turkey. The mosque was originally built as the St. Jacob Church and converted into a mosque by Şihabeddin Ahmed after taking over the city from the Armenian Kingdom of Cilicia around 1380 AD. The mosque is the oldest in the city and has later formed a part of the külliye that also includes a madrasah.

Saint Jacob Church was built in 1250 as an Eastern Orthodox Church, by the Byzantine Empress for the Byzantian Christians who are on their pilgrimage to Holy Land. Evliya Çelebi, one of the most famous travellers of Ottoman era, reports that this church was built outside of city walls because the Armenians in the city were hostile to the Eastern Orthodox Christians here. 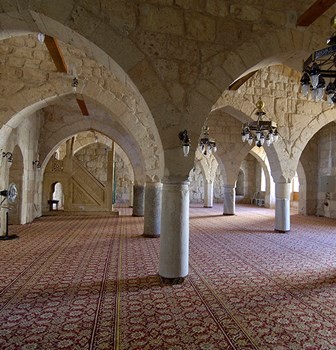 In 1359, the Mamluk Sultanate gained control of Adana. Shortly after this shift in power, Turkish families migrated to the city and converted a church into a mosque around 1380 and Ramazanoğlu Ahmed Bey commissioned this convertion.

The Mosque was renovated in 1501 by Gıyâseddîn Halil Bey. Later, his son Piri Mehmet Paşa built its minaret in 1525 and the school building (madrasah) in 1558. The building, which was previously called the " Old Mosque ", was named " Oil Mosque " due to the establishment of an oil market in front of the monumental courtyard gate in 19th century.

The prayer room of the mosque is rectangular in shape and has five naves, with four rows of columns. The mihrab, or niche indicating the direction used for prayer (facing Mecca during Islamic worship), is a remnant from when this space was originally an Eastern Christian church. The gate to enter into the mosque is made of yellow and black stones which have been intricately decorated in calligraphy work.

The medress is located in the courtyard of the mosque. It has classrooms, cells (bedrooms), and a kitchen in it. The classrooms are covered with domes and the cells have cradle arches that sit atop arcades. Some of the best examples of wooden artwork can be found outside on these archways that stand before each cell door.