Virgin Mary Cave Church, located in the Sultanselim District of Giresun Province, is in the form of a small cave carved into the rock at a height of 2-3 meters from the road on the western side of Giresun Castle, on the part facing the harbor. It is estimated that this building, which used to be a small cave, was enlarged and converted into a church in the 4th or 5th century AD.

This cave, which is used as a church, can be reached by a small stone bridge built in the Ottoman period. The church is surrounded by an atrium and on one side of the building there's a holy spring fountain for sailors to use and those who come to the church. 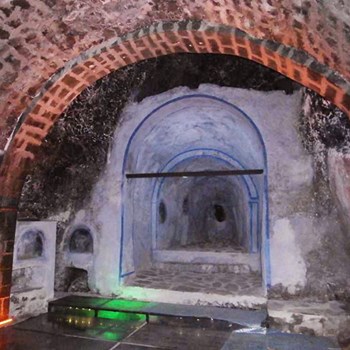 Popularly known as the Church of the Virgin Mary, this building is a small rectangular church with a single nave. In the church, which was generally built with simple materials, neat cut stones were also used in places, and the spaces between the stones were plastered with white mortar. The building is entered through a small opening added to the northwest corner.

Three crenellated rectangular windows in the northwest wall illuminate the space. The top of the church was covered with a barrel vault from inside the cave, and a half-round apse was added to the east facade. There are many niches in the church, some of which are broken. The water coming from the cave, which continues forward from the apse of the church, was transferred to the cistern by passing through a barrel vaulted channel under the church, and was connected to the fountain from there.

Some sources refer to the holy site as "Panaia" or "Surp Sarkis," it is three floors and the Virgin Mary's name is credited with the miraculous use of its healing waters. The natural cave surface was plastered in parts and restorations completed in 2013.