The Varda BridgePlaces to Visit in Adana

The Varda Bridge is located 2 kilometers north of Hacıkırı Village in Karaisalı county. The locals call the bridge “The Giant Bridge” and it was built in 1912 to complete İstanbul-Baghdad-Hejaz railway following Turkish steel trussing and stone masonry techniques. 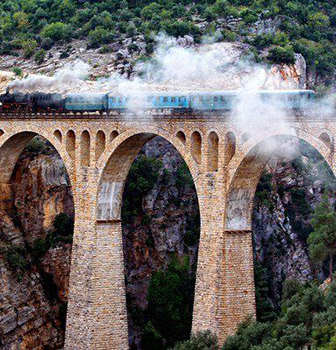 The building of the bridge was coupled with the construction of an important railway line to connect Berlin with Baghdad, then part of the Ottoman Empire. The connection enabled a direct supply of oil to German industry that had supplied ammunition for their military campaign against Baghdad.

The hardest 13-mile stretch of the route is between Konya and Adana in Turkey's Taurus mountains, more specifically from Belemedik–where 21 tunnels were dug in just 20 years.

Financed by the German Deutsche Bank, construction of the Viaduct was commissioned to Philipp Holzmann company, a renowned German company with experience in major infrastructure works. They were responsible for design and engineering work of the bridge. The work was also overseen by Winkler and Mavrogordato who ensure a smooth transition after Winkler's death.

In 1903, German technical staff escorted by thousands of multi-national workers settled a camp in Belemedik. The establishment provided hospital, school, church and even mosque to the workforce over time. The construction of the bridge (viaduct) began in 1905 and completed by 1907. Technical aspects were finished in 1912 with the railway eventually going into service in 1916.

The bridge has 11 arches, 30 metres (98 feet) long by 10 metres (33 feet) high. The central span of three is flanked on either side by four smaller spans: one 6 metre (20 foot), three 12 metre (39 foot)-long arches and four 10 metre (33 foot)-long arches. After erecting the masonry pillars, steel frame was set in place to build over a temporary falsework support. The viaduct spans north-to-south and curves 1,200 meters with a maximum radius of 3,900 feet.

The first Ottoman high official to pass over the Varda Viaduct was Minister of War Enver Pasha on February 18, 1917. Shortly before the end of World War I, the bridge was used by retreating German troops.

The Varda Bridge is over 200 meters long and 99 meters high. Some scenes from the James Bond movie Sky Fall were shot on the bridge in 2012. The bridge is 60 kilometers away from the city centre, and can be accessed by car or train.