The Tomb and Complex of Melike Mama Hatun

The Tomb and Complex of Melike Mama Hatun, from the Saltukid dynasty period in the 13th century is located at Tercan Village, which is 20 km from Erzincan. The inscription on the portal indicates that a master builder originally from Ahlat, Abu’n-Nema son of Mufaddal al-Ahwal, constructed it. The date is unknown because no information about its construction remains available. From architectural characteristics, we may date it to around mid-13th century CE.

This complex has a monumental tomb, caravanserai and bath situated in the town centre. The monument is set in the centre of a circular enclosure, which has unique architectural features. 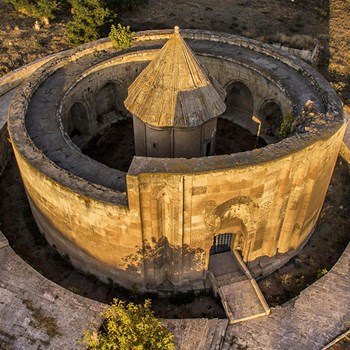 Arabic calligraphy decorates the exterior of this door, and muqarnas capitals on the inside contain Quranic verses in kufic script along with shapes that represent the Prophet Muhammad and four other caliphs. The name of the artist is inscribed at center bottom. The base of the two-storey tomb is square and has rounded corners on a raised area in the center. An eight-lobe roof sits on top. Access to both floors is via doorways in the south. There are a few steps leading to the upper floor, which is through a doorway with an arch and empty plaque.

The tomb is decorated with geometric bands and vegetal decorations. Drawings of kufic calligraphy are also featured in the decoration, along with a remarkable ornament - the bunch of grapes seen on the niche over the left window.