Tibeti Church (Tibeti Kilisesi) or The Cathedral of Tbeti (Tbeti Kathedrali) is located at about 15km from Savsat town, in the province of Artvin.

The village there the church located(at 1200m above sea level) is surrounded by dense forests and filled with numerous lakes. It is possible that the area got its name Tbeti from the presence of lakes. The Georgian word for lake district, tba-eti, offers evidence supporting this conclusion. The former cathedral buildings have, unfortunately, been damaged severely. Its walls are now nothing more than a ruin of what was once a magnificent cathedral building that served as the central site for life in an intellectually and culturally productive monastic community. 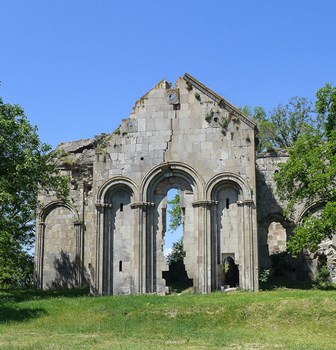 Tibeti Monastery was a medieval Georgian monastery in Historical Southern Georgia called as Tao-Klarjeti. At the time of the foundation of the cathedral, Ashot Kukhi was Bagratid prince. For this reason, he is credited with having founded Tbeti Cathedral sometime between 891 and 918.

The Cathedral of Tibeti, which Ashot Kukhi sponsored, may have been dedicated to either Saint George or the Mother of God. For Saint George, a series of wall paintings on the vault of the western arm is taken as evidence. The scenes we could identify were of St. George distributing his wealth to a group of assistants and then being tied to the wheel while two executioners turned it on pikes. Based on this decoration program, it is assumed that Tbeti Cathedral was dedicated to St. George.

It has been over the course of time that Tbeti Monastery developed into a significant center for cultural production. A number of hagiographical writings were created by monks living at the monastery. It became one of the most significant centers for calligraphy and manuscript illumination. In the 995, Ioane Mtbevari who was known as a composer of religious songs and a translator of several Greek works into Georgian created the Gospel of Tbeti. The Bishop Samuel of Tibeti commissioned to be decorated with miniatures in the tradition of Byzantine manuscript illumination.

Until the second half of the 17th century, Tibeti Cathedral still functioned as a Christian church. Thereafter, the local population opened a mosque inside this church. The mosque remained in use until the end of the 19th century. At present, no religious services are being held at what is now just an empty lot, and neither Christian nor Muslim ones.

Recent years have not been kind to the architectural remains of Tbeti Monastery and Cathedral. In 1961, a large part of the ceiling fell through as well as sections on both sides of the cathedral.

There are currently no records of any other buildings outside the main church. No further archaeological surveys have been conducted to document these discoveries because enough information was not found through excavations.