Tepebag is a historical neighborhood in the old town of Adana. It is situated on a hill overlooking the Seyhan River from the west, steps away from Taşköprü, and reflects traditional housing architecture of several cultures. Tumulus at Tepebağ was the area where settlers first set up settlement in Adana.

Adana has been rebuilt at the location of the Tepebağ Tumulus several times throughout history. The city didn't develop architecture much until mid-19th century, due to the nomadic lifestyles of Turkmens and Yörüks living in the city; as well as recurring destruction from floods from water near Seyhan River. 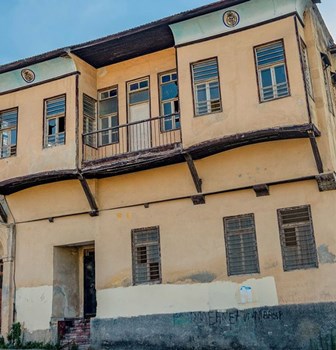 Until the late 19th century, Adana consisted of one-story houses made of mud brick. During this period, the city had a rapid development with improvements on the Seyhan River and manufacturing industry developments. The period of development also affected architecture, in that mud brick homes were replaced with two to three story structured durable ones. These are the building styles which could exist to present day and were named Traditional Adana Houses.

Houses in Tepebag were constructed with a mixture of ground level, mezzanine and main floor levels. The types of buildings vary depending on the elevation and slope of the ground surface. Most houses are built from brick stacking or wooden structure; recent construction includes concrete structures that are sometimes higher than 3 stories tall.

Traditional architecture in the region is constructed to contend with the hot and humid climate, with thick walls, few windows, stony pavements and inner courtyards on ground floor surfaces. The upper floors are lined by row windows along with projections which corresponds to both climate as well as earth roofs according to its type (plain)and eaves that can fold back like a protective shield depending on wind conditions.

The mansions found in the Seyhan River are an elegant and traditional type of residential architecture. The buildings can go up to 4 stories tall, with rooftop terraces that offer a cool breeze even on the hottest of days. Compared to the modest houses of the hill, these mansions are taller and have more spacious lots. The buildings in this area open directly onto the street without courtyards, and they take up all of a lot’s space.

The first registered buildings with historical value are referred to as homes in Row Mansions. Of these, the Hacı Yunuszade Mehmet Efendi and Bosnalı Salih Efendi mansions are noticable for their design. In the northwest of these row-houses, Suphi Paşa's mansion stands in good condition and has been a museum since 1981. However this buildinghas undergone extensive restoration after the Adana–Ceyhan earthquake in 1998.