Tas BridgePlaces to Visit in Adana

Taşköprü (Tas Bridge) , historically known as Ponte Sarus, is a Roman bridge spanning the Seyhan River in Adana that was probably built in the first half of the 2nd century AD. The bridge was a key link in ancient trade routes from Mediterranean Sea to Anatolia and Persia. Taşköprü has carried motorized vehicles until 2007 but now it only hosts foot traffic for social events.

Tas Bridge has been used and altered by a variety of civilizations. The Hittite king Hattusili I is reported to have built a bridge in Adana while on military campaign in Syria, although it remains unclear if this is the same bridge that spans the Seyhan (Sarus) River. 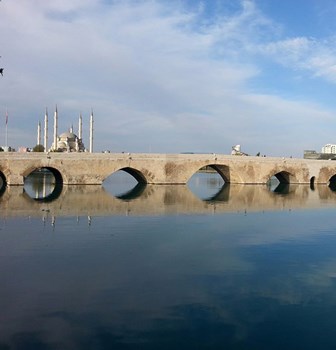 The current bridge in Adana is believed by some historians to have been commissioned by the Roman Emperor Hadrian, who ruled from 117 to 138 AD. This belief is based on an 1852-1853 journal article written by a French diplomat who visited Adana.

According to some accounts, the construction of the bridge may have been attributed late in its lifetime to a Roman architect named Auxentius. This attribution is based on an inscription written in Greek that served for a while as the altar of Adana's Greek Church and which can now be found at the Adana Archeological Museum. The 12-line inscription is inscribed on a slab 122cm tall, 93cm wide and 12cm thick. However, further research seems to link this inscription to delivering waterwheels with water from nearby springs rather than construction of the bridge itself.

The bridge has been restored many times over the centuries. After a restoration during the Umayyad period in 742, it was renamed Jisr al-Walid after the ruling caliph, and later Caliph Al Mu'tasim also did work on it. There is no written record of another restoration until the 17th century.

The current length of the bridge is 310m (1000ft). The Ottoman traveller Evliya Çelebi recorded a length of 550 feet at the time of his visit. There are 21 arches: 15 primary arches to carry the deck across the river and six small relieving arches.

In 2007, the bridge was closed to motorized vehicles. Since then, it has become a place for social and cultural events. The bridge's sculptural decoration includes a lion relief on the north side of the 11th arch, and various star-and-crescent artwork.