Sillyon is a small town in the historic region of Pamphylia. It can be found at 16 kilometers from Serik and 30 kilometers from Antalya. Like all other cities in Pamphylia, Sillyon is generally considered to have been founded by heroes Mopsos and Calchas after the Trojan War.

The ancient city of Sillyon, where the Hellenistic city remains are the most concentrated within the borders of Antalya, which also preserves its feature being a city where Hellenistic defense is best represented. 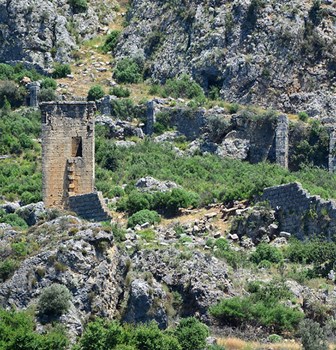 Researchers maintain records of Sillyon from the early fifth century BC, and the city appears in lists of what scholars have classified as a tax-paying member of the Delian League.

After the disappearance befell Sillyon is its records in 425 BC, it reappeared in 333 BC. In this time period, Alexander The Great was unable to conquer the city because of its imposing fortifications and an army of mercenaries.

The Hellenistic era was a time of great growth for Sillyon, as it came under the rule of the Seleucid Dynasty and grew in size with many grand buildings. In an age when the Kingdom of Pergamon dominated much of what passed for civilization, its status as an autonomous city remained intact due to Roman Senate support from the Romans. It continued minting coins until 270 AD. .

A city of relative importance in the Byzantine era, Sillyon was also home to two ecumenical Patriarchs: Constantine II and Anthony I. In 678 AD at a site near Sillyon, a rainstorm destroyed an arab fleet that had failed to conquer Constantinople.

Sillyon, a fortified city, was the seat of the imperial representative. From the city began a great road connecting the coast of the Mediterranean Sea to Amorium and Nicaea (now İznik) with Constantinople. During the turn of the 8th and 9th centuries Sillyon became the region's main city, overshadowing nearby Perge which lost its status as bishopric in favor of Sillyon. Despite its great fortifications, in 1207 it was conquered by Seljuks along with all of Pamphylia.

Approaching the town from the path one comes across what remains of the stadium and arrives at Lower Gate, a design similar to Perge's. And at its feet, the remains of a gymnasium. A 5-meter wide ramp leads into the city. In ancient times this ramp enabled carts to bring in goods and trade to Sillyon.

At the southern end of town there are the remains of a theater, although after the landslide only the upper rows from seats remained. No trace is left from the nearby odeon. You'll enjoy great views to the south, a wide plain stretching all the way to the Mediterranean coast. In this district there are preserved walls of an ancient temple decorated by four pillars on its eastern side.

In the center of Sillyon, which has some of the oldest buildings in the city on its eastern side, is a large building from Byzantine times that may have been used as a palaestra. You can also see Hellenistic structures there.

If you want to visit Sillyon, prepare for a hike- the altitude of this small town is no joke. But don't worry - once you see the views at the other end of your arduous journey, they will be more than worth it.