Side Ancient CityPlaces to Visit in Antalya

Side, located halfway between Antalya and Alanya, is a popular resort on the Mediterranean coast and also an ancient city that has been preserved. In antiquity, Side flourished in the slave trade which contributed to its wealth and power as a settlement. Even if you are not a beach person, do not miss out on this location because there are many ruins from Hellenistic or Roman time periods which draw tourists here, as well as a local museum operating in former Roman baths with many interesting artifacts.

Side was founded in the 7th century BCE by Greek settlers from Kyme, a region located in the north-western part of Anatolia. The patron goddess of Side was Athena, whose head was depicted on the coins minted here. The people of Side were originally Greeks, but lost their language and customs over time. Researchers have yet to understand the dialect from 3rd and 2nd century BCE inscriptions, but know "Side name" referred to pomegranate in the local dialect. 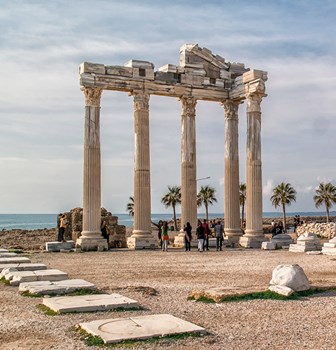 Thanks to its favourable location at the natural harbour Side quickly became one of the most significant settlements in Pamphylia. It would come under the rule of Lydia and later Persia for centuries, but little is known about this period of history.

In 333 BCE, Alexander the Great conquered Side without a fight and before embarking on his great eastern campaign left a small garrison there. Thus people of Side came into contact with the Hellenistic culture. Following Alexander's death, Side fell under domination of one among diadochi (Ptolemy), who declared himself king in Egypt.

The Ptolemies in Side ruled from the 2nd century BCE to the Seleucid occupation of Side in around 160 BCE. Throughout this period,Side maintained significant independence and was an important cultural center for all of Pamphylia. In the years from 188 to 67 BCE, Side acted as an independent city and minted its own coins, tetradrachms with a Nike goddess holding a laurel wreath. In first century BC in response to worsening piracy and slave trade from Cilicia, Pompey defeated pirates of Side led by Publius Servilius Vatia Isauricus of Romans in 78BC .

Around the year 25 BCE, Emperor Augustus reformed the administration and according to new provisions, Pamphilia was incorporated into Roman province of Galatia. The population rose to 60,000 and prosperity lasted for some time until around 3rd century CE. The merchant fleet of Side often played a double game--of peaceful merchants and, in favorable circumstances, bloodthirsty pirates. Wealthy traders allocated large portions of their income for the development of the city and its beautification plans. They sponsored new public buildings, gladiatorial combats, contests with prizes to provide entertainment for the people residing there as well as themselves. Most—if not all—the ancient buildings preserved until today in Side date back to this period of history. . 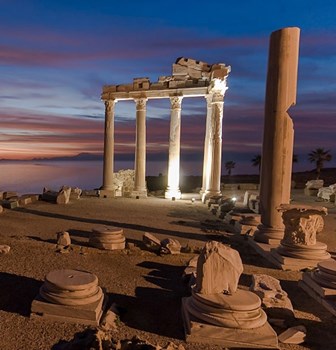 The decline of the Side began in the 4th century CE. The mighty city walls were not able to stop invasions from local tribes that were coming up from the Taurus Mountains into Side. In 5th and 6th centuries CE, after some respite, it became the seat for bishops in Eastern Pamphylia and even became prosperous again. Its prosperity ended in 7th when an Arabic fleet attacked side with success taking over what was left of it ransacking and ultimately burning most of it down.

The 10th century marked the beginning of a time for Side where very few people remained, and those resident in the 12th century abandoned the city entirely. The memory of Side's power faded away and, instead, "Old Antalya" was used to describe the ancient ruins present at that site.

During the Seljuk and Ottoman empires, Side was not an inhabited city. Turkish refugees from Crete first inhabited it in 1895. They named it Kestel (Selimiye) over time.

For lovers of ancient history, Side is definitely worth a visit. Here there are many relics from the days when the city flourished as a centre of trade. The most impressive monuments include: -The theatre from the Roman period -The ruins of three temples: Apollo, Athena and Men which are situated in a picturesque area close to sea coast near harbour -Also the Roman Bath building near agora which now operates as an Archaeological Museum of Side contains with many fascinating statues and sarcophagi

In addition to the ruined Byzantine hospital and magnificent nymphaeum, there are also monumental gate with adjoining fountain, known as Vespasian Monument.

We highly recommend spending an entire day exploring the ruins of Side that date back 2,000 years. You'll find ancient relics like a ruined library and basilica from Byzantine times. Stay for some more time and you'll also get to explore two more baths buildings as well as a Temple of Dionysus at one of them (the theatre).