Serefiye Mosque is a complex that was established in the south of the city center, consists of a mosque, a madrasa, a kitchen, and a tomb. According to its inscription, the complex was built by Serefhan IV in 1529.

The Serefiye Mosque, located in the south of the courtyard, is constructed with smooth cut stone materials and consists of a five-section narthex and a transverse rectangular harim. The north doors are shifted to two corners on the facade which leads into the harim. Inside this area is domed and has three transverse naves. 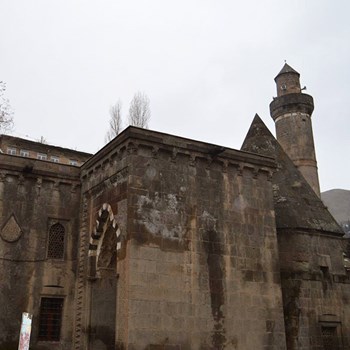 The dome in front of the mihrab intersects with each of the four other naves, and spans between them on all but one side. The first nave on the qibla side is covered by a dome at its corners while barrel vaults span between them. The second nave, which is wider, covers more area with barrel vaults that are set at different heights. Barrel vaults run through these spaces in between to cover an a third nave as well, even though only two have domes that span from one corner to another.

The dome that covers the mihrab in front of the sanctuary is made of bricks on the inside and slightly rounded, with a high cylindrical drum and flattened at the outside. The roof on top of the sanctuary as well as its last assembly area are handled as a flat roof. There’s also a five-section narthex on one side (the north) of this mosque, which faces out to the courtyard.

The mihrab is rectangular-shaped and has a semicircular plan. On the top, it features both inscriptions in Arabic - meaning "Kavsara" and "ma'kil." The doors consist of plain rectangular openings with two corners adorned by half-rose bezek, or carved stones. There are rich floral ornaments on the body and capital of the pillars as well as on the lintel. On top of that, there is a pointed arch opening on the eastside with openwork geometric patterns inside it. The piers, arches and walls are all smooth cut stone while both floors and ceilings have plaster.

The main walls now have wood covering half of them. The mihrab niche as a hemispherical plastered top, and the pulpit is made from wood and is not original. There are various religious and geometric patterns carved into it.