Sabuncuoglu Medical and Surgical History MuseumPlaces to Visit in Amasya

Sabuncuoglu Medical and Surgical History Museum was built in 1308 by Anber Bin Abdullah to celebrate the reign of Sultan Olcayto and his wife İldiz Hatun during the Ilkhanate reign in Amasya. The building is modeled after the classical Seljuk medresseh with iwans - vaulted rooms with one side open to a court – facing each other, while a courtyard can be found ontop of two opposing sides and extending through archways for more.The facade, the entryways, and the archways are built of hewn stone whereas the rest is made of broken stones. All the decorations on the otherwise fair-girded building focus solely to the monumental portal at its face and the windows spaced evenly on both sides of it. 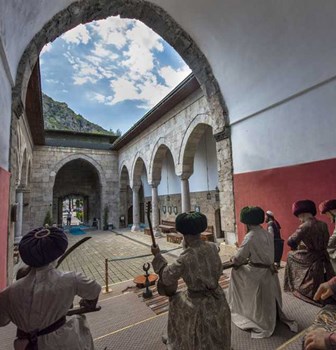 The portal is placed on the facade of the building high, which stresses its monumental beauty.The geometrical and patterned stone work which is typically seen in Seljuk architecture, is among the most beautiful samples of this period. The sculpture on the outer facade of the building reflects typical Seljuk architecture. With a keen eye, one can see many patterns that are commonly found in the architectural styles of Sivas, Konya and Divriği. The relief of a kneeling man on the keystone of the arch of the portal, which is surrounded with a triangular niche, adorned with muqarnas edging was first used in this building. The aesthetic quality of the facade is complemented with the grand windows on both sides of the portal.

The Sabuncuoglu Medical and Surgical History Museum is the only artifact remaining from Ilkhanid rule, which played a significant role in finishing Anatolian Seljuk reign. This institution became Turkey's first hospital to provide medical assistance through music.