The Roman Baths and Open Air MuseumPlaces to Visit in Ankara

The ruins of the Roman Bath in Ankara covers an area of approximately 65,000 sq. meters and has been turned into a museum through repairs dating back to 1997. Approximately 1,000 stones are scattered throughout the ruins. They have been classified into three main groups: tomb steles, tablets and architectural pieces. In the southern wing of the Palaestra, tomb steles from Roman and Byzantine times are available; blocks with scriptures, postaments (pedestals), and water pipes can be found in the northern wing; architectural works such as altars are showcased in the eastern wing. Sarcophagi and lion sculptures can be seen throughout this middle section. 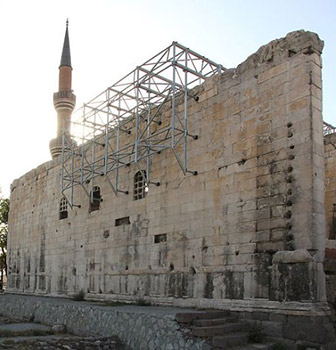 Columned Road: It is known that the columned road located partially to the east of the bath building and palaestra extends to the location where Augustus' temple, which was formerly a holy place in ancient Ancyra City occurs. This columned road was discovered during the first years of Republican period while Çankırı Avenue was being constructed. The road which is speculated to have been created around 3rd century AD, consisted of marble pillars with Corinthian heads.

Bath Building: The bath dates back to Caracalla’s reign (212-217 AD) according to the head of excavations from coins found in the excavation. This is confirmed in an inscription by Tiberius Julius Justus Julianus, who is responsible for the construction of the bath and one of the leading people of the city. As was understood from other coins found during the excavation, the bath was used continuously and repaired from time to time within 500 years of use. The remains of the building are very well preserved, which indicates that it was built to imperial standards rather than a provincial city bath.