The Ramazanoğlu Mansion is the old government residence with a Harem belonging to the Ramadanid family. It is one of the oldest examples of houses in Turkey, and aside from being an expression of modesty of the Emirate, it was also reminiscent of Mamluk mansions in Egypt.

According to inscription on the south gate, Haremlik was completed by Halil Bey in the year 900 (1495 AD). This construction date does not represent the completion date for this building. The section completed in 1495 was an attachment that connected to a structure on the north side which was built earlier. Next to Harem, used stand little mosque known as Selamlık where government offices were located. Only remains today are part with dome and section that assumed possibly be former hamam - besides from other insignificant sections of bones or ruins of buildings. 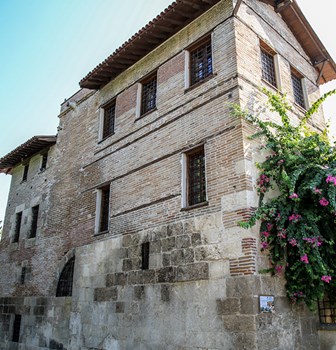 During the Ottoman era, the mansion served as a residence for various sultans visiting Adana, including Suleiman the Magnificent and Selim I.

The mansion underwent a major renovation in 1983. The 1998 Adana-Ceyhan earthquake damaged the building, which was subsequently restored by the General Directorate of Foundations. In 2009, Çukurova University took over management and operations of the mansion to convert it into a cultural center. Concerts and other performances are now regularly held there.

On the south section of the ground floor, there is a stony area with stairs leading to the upper floors and two rooms on both sides. There's also a hallway in the middle and on one side, there are some groin vaults. One half of this part was most likely used as Selamlık.

The mezzanine level of the mansion is made up of a kitchen, two rooms and a hall in between. The upper floor contains bunk beds on the west end and this space is west of the landing. There are no decorations in this area except for a verse from Koran which says "Küllema dahele aleyha Zekerriyya'l-mihrabe" translated to be "Every time Zechariah entered the mihrab where Meryem was there, he found water and food given to her.".