Porta (Khandzta) Monastery holds a special place in Georgian history but today it's a severely dilapidated series of ruins high above the Artvin–Ardahan road.

Gregory of Khandzta was an important Georgian ecclesiastical figure and a founder and leader in numerous monastic communities. He is best known as a founder of the Monastery of Khandzta (Porta).

In 780, the future St. Gregory of Khandzta moved to Tao-Klarjeti in order to resume Georgian monasticism in the region. Tao-Klarjeti is a Georgian historical and cultural region in north-eastern Turkey and south-western Georgia. The region is based around two river basins - Chorokhi and Kura, but also includes the upper source of the Aras river. 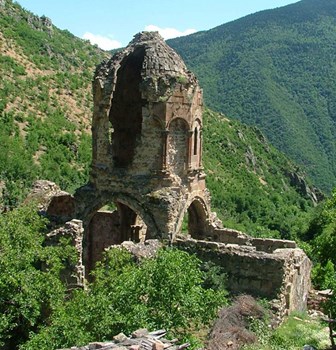 Initially residing at the monastery of Opiza, he then founded his own monastery at Khandzta in 782. Under his direction this became a monastic stronghold in Tao-Klarjeti.

The first church at Khandzta was built of wood by Gregory and his followers. A dining hall and living quarters were also built at that time (end of the 8th century). In 820, during the reign of Ashot I, a stone church was built.

The present church building appears to be a replacement, dating from 918. The remote site made construction difficult because the high-quality stone was not available in close proximity and had to be transported long distances. Construction was completed in 941.

Several styles of architecture can be found at Otkhta. A bell-tower was added in the 16th century, and a chapel from the medieval era has been turned into a fountain with its east wall acting as water spout.

From that time, the integration of the region into the Ottoman Empire and progressive Islamization of the population led to the monastery's abandonment.

The main church of the complex was built on an artificial terrace. Despite significant damage, its' major structure has survived for so long. A crucial part of the facade has been destroyed and most of its dome collapsed in 2007.